Why Men Don’t Give Reassurance (and How to Get Some in 3 Easy Steps!)

Can we agree on this? After a fight, it’s nice to get a little reassurance that “we’re going to be okay.” After an emotionally revealing conversation, it’s good to be reminded that he loves you no matter what. When he’s acting withdrawn for some weird reason, that’s the time you need his expression of love the most!

And, yet, does he give you the reassurance you crave?

Or does it feel like the more you seek it, the more he pulls away?

Is this just "one of those things" you have to get used to? Is this something in your relationship you have to “lower your expectations around”?

You CAN get the reassurance you crave (I get it ALL THE TIME) and in this post and video, I’m going to show you why your man doesn’t give it to you, and how to get it anyway in three easy steps. Because...THREE EASY STEPS you guys!

Can you imagine how much pain and heartache you can say goodbye to now? Imagine what it will feel like getting the loving reassurance you want, when you want it. Let’s do it! Hit play.

When my boyfriend and I get into a fight, he remains withdrawn for the rest of the day and isn’t as affectionate as he usually is. I can’t help but worry I’ve ruined things and that he’s having doubts about us.

I feel desperate for reassurance that we’ll be okay. I ask him to say something nice to make me feel better. He tells me he loves me, and we’ll be fine, but can I trust that what he’s saying is truly how he feels? He still seems so distant and cold. Am I going to push him away by my need for reassurance?

What’s Wrong With a Little D-O-U-B-T?

Great thinking! Yes, your need for reassurance can push him away.

When you seek reassurance about his love for you, it’s especially frustrating for a man. In his mind, of course, he loves you! Why else would he listen to you talk about your day, help put the groceries away, and pay for the movie tickets?

When you express doubt, he takes it personally and assumes your doubt is because he hasn’t been doing a great job of being your boyfriend.

When he gets the message over and over again that he’s not doing a great job, he starts to believe you and, eventually, he’ll stop trying, throw in the towel, and walk away from the relationship.

And yet, how do you STOP needing reassurance? Is it even possible?

It’s easy to make assumptions about women who need reassurance:

Sure, some of these may be true — sometimes. But most of the time, they’re NOT.

In Men Are from Mars, Women Are from Venus, John Gray explains that one of a woman’s primary love needs is reassurance. That’s the way women feel love from their partner. When a man repeatedly shows he cares, understands, and is devoted to his partner, her need for reassurance is fulfilled. She knows she is loved.

However, when he pulls away and withdraws emotionally — temporarily NOT showing that he cares — her need for reassurance naturally makes itself known.

Men commonly make the mistake of thinking that once a woman is happy and secure in a relationship, then forever more she should know she is loved. End of story.

This is not the case.

A relationship isn’t a one-time fee investment; it’s more like a subscription service. You need to regularly make deposits of effort and love in order for a woman’s need for reassurance to be fulfilled so that she feels loved in the relationship.

A woman cannot ditch her need for reassurance — that’s not realistic — but she CAN learn how to get it in a way that doesn’t frustrate or alienate her partner.

Why Men Don’t Give Reassurance (and How to Get Some Anyway!)

Men tend to misunderstand a woman’s need for reassurance — interpreting it as a complaint that he’s not a good enough partner. Because they don’t understand the REAL reason women need reassurance, men don’t automatically support that need.

Therefore, you need to learn how to get the reassurance you need from the partner you got…even when he’s cold and withdrawn.

How to Get the Reassurance You Need in Three Easy Steps

Step 1. Give him the words you want to hear.

You did this when you asked for him to “say something nice.” But the magic happens when you’re even more specific and ask for the words you want to hear.

When I use this tool in my relationship, I like to say:

“I know you don’t have a ton to give at the moment. That’s okay. There are words I’d like to hear that would help me feel better. If there's a part of you that can connect with them in a genuine way, would you say this to me:

I love you. This is just a fight. We’ll get through this.”

Be patient as he mulls over the words, and then when he speaks, allow those words to reassure you.

I get how you might have reservations about step #1. After all, how do you believe him when he’s simply repeating the words you’ve asked him to say?

The trick to believing his words — even though the delivery sounds like a cold and angry parrot — is to understand his language of love (how HE naturally expresses his love).

Men do not intuitively express their love through WORDS.

They can and do, but it’s usually because it’s a special occasion, or it’s because they’ve learned the skill of expressing their love through words in order to make their lady happy.

When you ask him for the words you want to hear and he says them, he’s taking the action he sees will make you happy. Ultimately, it is his ACTION that proves his love. If you ask for something and he delivers, that’s love.

Step 3. Ask for reassurance in his language.

After he’s said the words you want to hear, let him pull away and withdraw to his cave. When he returns, use your new smarts, and do not show any D-O-U-B-T. Do not seek reassurance in the OLD way.

After cave time, the goal is to set up a scenario where he can SHOW you his love, reassuring you that you are loved, using his own intuitive love language — ACTION.

You can achieve this goal by asking him to do something for you. For example: “Would you make me a cup of mint tea?”

When he does, respond with delight or appreciation. At that moment, you get to be reassured that he loves you, not just through his WORDS but through his ACTIONS, the ultimate language of love on Mars.

The 3 Real Reasons Men Pull Away

I get it. Understanding men and how they work can be a lot because they’re SO different from us. To help you move forward with confidence and clarity (instead of guessing and stressing), I created a FREE 3-day mini-course called The 3 REAL Reasons Men Pull Away. This email course will explain exactly why men act weird after a fight (it’s really not about you). You can sign up for free and learn more right here. 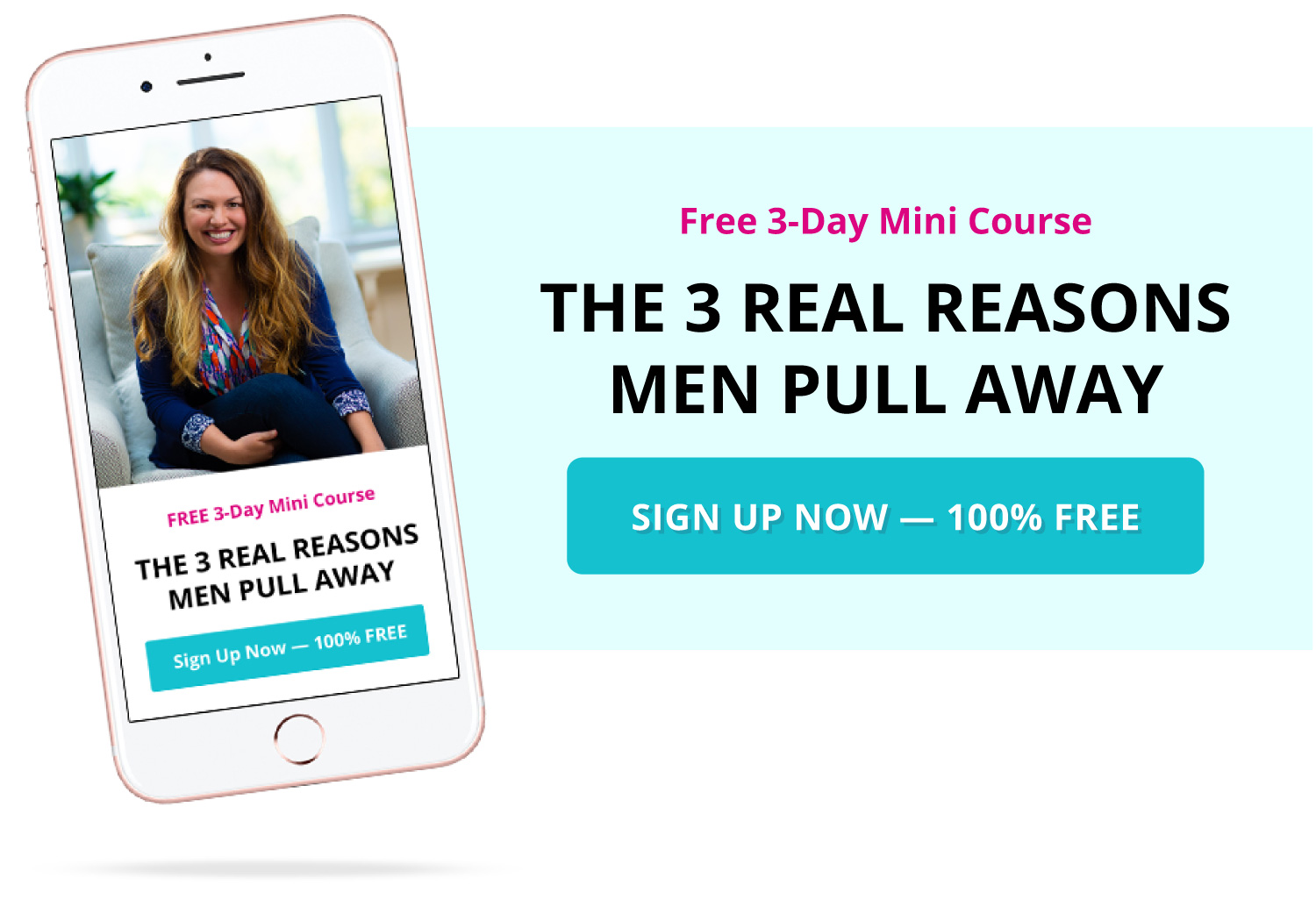 LOVING THIS ADVICE? GET MORE FOR FREE!

Sign up here to get our best tips delivered straight to your inbox.

We hate SPAM. We will never sell your information, for any reason.

MV Quick Tip: When You or Your Partner Are Upset, Do This
This Progressive Relaxation Technique Will Calm Your Mind
We Had a Great Date! Why Won’t He Text Me Back?